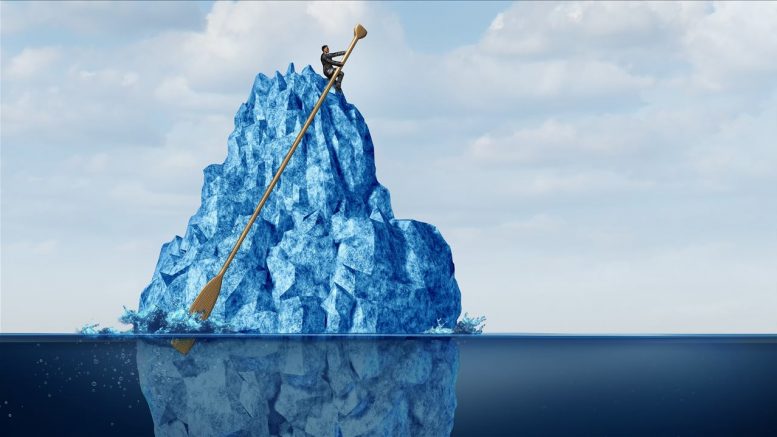 Below the surface: there could be about 50 per cent more growth of capital assets in your business than is apparent.

From running a business to managing an economy, understanding the value and whereabouts of capital assets is vital. But this isn’t as easy as it sounds, writes John Egan.

What are the capital assets of your business, or indeed of your nation, upon which the productivity of both depend?

In a business you might survey the hardware stretching across the shop-floor and ruminate over the balance sheets of your company accounts. For an economy you will review its national accounts, along with their estimates of the components of Gross Capital Formation (item P5) that contributes to Gross Domestic Product (GDP).

Tangible assets in the form of buildings, equipment and machinery are clearly fixed and relatively straightforward to account for. Knowledge, on the other hand, is intangible but not inconsequential and worthless to its owners. As a business manager surveying the shop-floor you will know that knowledge is out there in the company routines and innovations upon which productivity and survival depend.

But how can you manage your knowledge assets without knowing their location and value?

Some knowledge is already visible and “capitalised”, appearing in company and national accounts as intellectual property. This includes knowledge in computer programmes and databases, together with knowledge acquired through scientific research and development, product development and non-scientific creative activities.

In February, the Office for National Statistics (ONS) in the UK ventured into the territory of the invisible and non-capitalised intangible assets.

Usefully, this exploratory study introduces a classification of these intangibles. This provides a means to recognise and organise the previously unclassified assets. The complete list of already capitalised and currently non-capitalised intangible assets is shown in the graphic below, along with their value to the UK economy as estimated by the ONS. 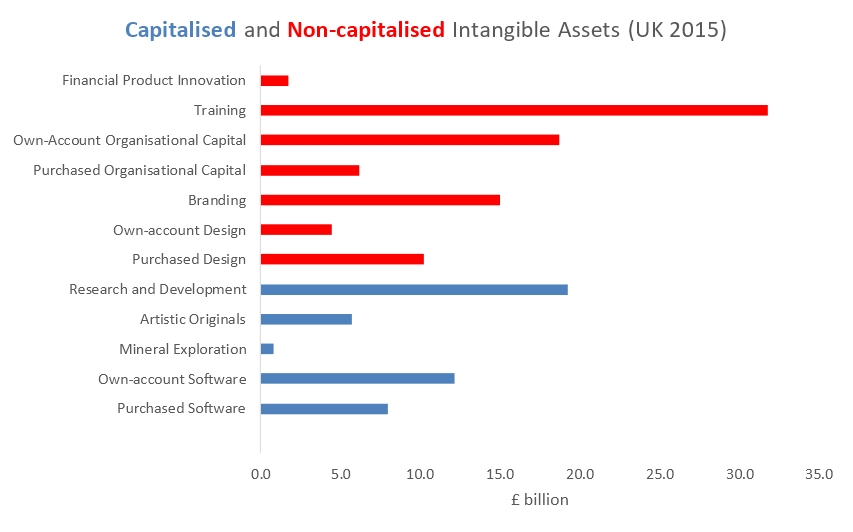 Rachel O’Brien, head of intangible and infrastructure assets for the ONS, explained in her recent blog that “intangible assets, such as branding and the benefits received from training, are not currently included in headline national accounts, for various reasons such as their benefit is seen [as] being used up too quickly or because it is difficult to estimate their value. This does not mean, of course, that they have no value”.

Two-thirds of the iceberg of intangible assets therefore appears to be submerged and currently invisible.

Taken together, this means that current estimates of Gross Fixed Capital in the market sector of the UK national accounts would actually be increased by almost 50 per cent by the inclusion of the missing non-capitalised intangible assets.

As a result, national economic Gross Value Added (GVA) could be underestimated, in particular the productivity of the UK economy, and the missing intangible capital might go some way to explaining the puzzling lack of productivity growth that has been apparent since the Global Financial Crisis in 2007.

As it is with the country, so it may well be the case with the companies that make up the UK market sector. Although it will be highly variable depending on the business, as shown in the above table, there could be about 50 per cent more growth of capital assets in your business than is declared on your annual accounts statement.

Recognising this issue is the first step to managing it.  And the story might not end there.

It may be that other business expenses could be considered to have intangible but enduring effects on productivity. Indeed, a broad view is that all company operating expenses could fall into this category. Otherwise, one might argue what is their point?

The iceberg could yet be larger than anticipated.

In the same series:

Berlin vies with London to be tech capital of Europe

A new deal for the rich

Secret dossier on coronavirus damage
The government has drawn up a secret dossier detailing the impact of coronavirus on the economy, with a dozen sectors rated “red” and facing significant job cuts and revenue losses, The Times has been told. The Covid-19 sectoral impacts dashboard, which is prepared by officials from across Whitehall and frequently updated, gives “granular” detail on the effect of coronavirus on nearly 40 areas of the economy. Among the sectors with a red rating are aerospace, the automotive industry, retail, hospitality and tourism, arts and heritage, maritime, including ferries and cruises, and sport. Details of the document emerged as up to 70 Tory MPs prepared to rebel today over the government’s new tiering system, which is due to come into force tomorrow. The Times, December 1

PM will take back power to call elections
Boris Johnson will start to claw back the power to call an election today with a warning to judges to keep out of decisions to bring parliaments to a close. Legislation repealing the Fixed-term Parliaments Act is published today, with ministers seeking to restore the power to go to the country conferred by royal prerogative, according to senior government sources. Mr Johnson included a promise to scrap the FTPA in the Conservatives’ manifesto in last December’s election, called after a six-month Brexit stalemate in a hung parliament he could not dissolve. It was presented as part of a wider roll-back of what he regards as improper judicial encroachment into politics following the Supreme Court ruling that his prorogation of parliament in September 2019 was illegal. The Times, December 1

Watchdog calls for UK govt to provide evidence for PPE contracts
Ministers need to provide evidence for why multimillion-pound contracts for personal protective equipment went to certain suppliers in order to prevent “indefinite” public suspicion, the head of the UK’s public spending watchdog has warned. The government spent billions of pounds during the spring on PPE to address an urgent shortage in the NHS and elsewhere, abandoning the usual competitive procurement in favour of buying gowns, masks and gloves in haste from many small companies. Since then, however, it has emerged that many of the companies receiving huge contracts had no background in PPE, while some turned out to have links to the Conservative party. A recent National Audit Office report revealed that suppliers put on a “VIP list” – through recommendations by ministers, MPs or senior officials – were 10 times more likely to receive contracts. A small family company of pest controllers, called Pestfix, received a deal worth £350m after being put on that list due to an “error”, the report disclosed. Financial Times, December 1

Farm animals’ antibiotics data raises trade fears
The overuse of antibiotics on farm animals is rife in some of the key countries with which the UK is hoping to strike a post-Brexit trade deal, a new report shows, raising fears that future deals will jeopardise public health and British farming. The US, Australia, New Zealand and Canada all allow farmers to feed antibiotics routinely to livestock to make them grow faster, and in the US and Canada farm antibiotic use is about five times the level in the UK, data compiled by the Alliance to Save Our Antibiotics shows. Meat produced in this way is cheaper, because the animals grow faster and can be kept in overcrowded conditions. But the meat is soon to be banned in the EU, for safety and public health reasons. Antibiotic use in cattle in the US is about seven times that in the UK, and in pigs twice as high, according to the report. In Australia, the use of antibiotics in poultry is more than 16 times higher than in the UK, and use in pigs about three times higher. The Guardian, December 1

UK’s post-Brexit visa application system opens
New immigration rules will be “simple and flexible”, ministers have promised, as the UK’s points-based post-Brexit system prepares to go live. From Tuesday all foreign nationals, including from the European Union, who want to work in the UK from 1 January will have to apply online for a visa. Those seeking a skilled worker visa will need a job offer, to be proficient in English and earn at least £25,600. Free movement from and to the EU will come to an end on 31 December. EU citizens already living in the UK by 31 December and their families do not have to go through the new system but instead can apply to the EU Settlement Scheme, and have until 30 June 2021 to do so. If they are successful, they will be able to remain in the UK and claim the same benefits as UK citizens if they become unemployed. Irish citizens do not need to apply to the scheme and will not require permission to come to the UK, as the UK and Ireland are both part of a Common Travel Area. BBC news, December 1

UK house prices rise at fastest rate in six years
UK house prices rose at the fastest annual rate since the start of 2015 in November, despite the lockdown, as buyers rushed to take advantage of the stamp duty holiday. The average house price rose 0.8 per cent to £230,000 in November, up 0.8 per cent compared with the previous month, the fifth consecutive expansion according to Nationwide data. Compared with the same month last year, house prices were up 6.5 per cent, the fastest pace since January 2015. The annual rate was well above the 5.5 per cent forecast by economists polled by Reuters, who expected a cooling from the 5.8 per cent annual growth in October reflecting the effects of the lockdown restrictions. Robert Gardner, Nationwide’s chief economist, said that annual house prices had accelerated despite signs that the UK’s economic recovery “had lost momentum”. The housing market has experienced a mini-boom since the stamp duty holiday was introduced in July. The sector was expected to cool in the autumn given renewed weaknesses in the economy and widespread job losses. Financial Times, December 1

Temperature analysis shows UN goals in reach
A new analysis, seen by the BBC, suggests the goals of the UN Paris climate agreement are getting “within reach”. The Climate Action Tracker group looked at new climate promises from China and other nations, along with the carbon plans of US President-elect Joe Biden. These commitments would mean the rise in world temperatures could be held to 2.1C by the end of this century. Previous estimates indicated up to 3C of heating, with disastrous impacts. But the experts are worried the long-term optimism is not matched by short-term plans to cut CO2. For more than a decade, researchers from the Climate Action Tracker have kept a close eye on what countries’ collective carbon-cutting pledges mean for our warming world. BBC news, December 1

Wisconsin and Arizona certify Biden wins
Joe Biden’s victories in the US presidential election battlegrounds of Arizona and Wisconsin were officially recognised on Monday, handing Donald Trump six defeats out of six in his bid to stop states certifying their results. The finalised vote counts took Biden a step closer to the White House and dealt yet another blow to Trump’s longshot efforts to undermine the outcome. The certification in Wisconsin followed a partial recount that only added to Biden’s nearly 20,700-vote margin over Trump, who has promised to file a lawsuit seeking to undo the results. The Guardian, December 1

Trump ties Biden’s hands with China sanctions
President Trump is to blacklist two of China’s most influential companies as he looks to box in his successor by escalating his diplomatic and economic offensive against Beijing. China National Offshore Oil Corporation, the state-owned oil company, and Semiconductor Manufacturing International Corporation, the country’s biggest maker of chips for the technology industry, are to be sanctioned over alleged links to the military. Mr Trump, 74, has vowed that China will “pay a big price” for the coronavirus outbreak as new American cases continue to break records. The president is trying to recast the trading relationship that he has called “the greatest theft in the history of the world”. The Times, December 1