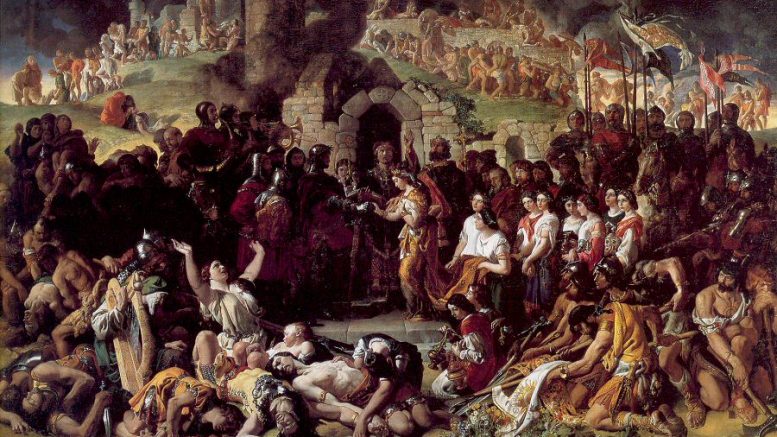 The colonial mind-set will employ a cognitive dissonance of superiority before questing after another nation’s natural resources.

It was no different between imperial Britain and pastoral Ireland. Giraldus Cambrensis, the Welsh ecclesiastic, wrote in 1188: “The Irish are a rude people, subsisting on the produce of their cattle only, and living themselves like beasts”. His sentiments appeared not long after the Norman invasion.

It was an attitude and behaviour oft repeated over the next 800 years. Only after the Emerald Isle had relinquished her trees in service to her maritime neighbour, under Elizabeth I, could the Brits once again refer to its citizens as bog dwellers. A cruel irony. But there was another much bigger irony on display this week, when Enda Kenny, the Irish taoiseach, suggested that the country could be even worse off than Britain following the Brexit vote.

He was speaking after announcing that an “All-Island Civic Dialogue” will take place on November 2. “It is more of a listening exercise from political parties because we need to hear the voice of retail, the voice of trade, of commerce of the construction sector, education and all of these areas, north and south,” he told the Irish Times.

The two nations first became entangled when the Normans arrived in 1166, when the Brehon clan system was gradually superseded by serfdom. The Irish moved from a family-centred society to one of master and servant. Though the Anglo-Normans at first acted as administrators for the Crown, they soon became “more Irish than the Irish”.

Today, the Irish political class is dominated by a bumbling, “cute hoor” mentality, perhaps best exemplified by the tenures of Charles Haughey and Bertie Ahern – both of whom were widely vilified following costly and long-running tribunals into political corruption.

Both countries often acted as one among the EU bureaucracy, parroting each other on matters of trade, regulation, financial services and taxation. Concurrently, Ireland was happy to be the guinea pig for onerous, and sometimes disturbing, initiatives from Brussels – ranging from restrictions on herbal medicines to the condescending conditions of its €85 billion bailout of the country in 2010. Not so much a case of Irish duplicity, rather an historically conditioned Stockholm Syndrome.

With the collapse of sterling and continued talk of a hard Brexit, the economic ramifications of divergence have already materialised as job losses in the low-margin agri-food sector, with concerns growing over the more general effects of market sentiment.

But there are also glaring opportunities for Ireland as Britain becomes more isolated from the Continent. Dublin’s thriving, if modest, financial district could easily accommodate an influx of global banks and hedge funds. Its very low corporation tax has already courted technology giants such as Apple and Google. Ireland would also make a convenient location for UK-based companies wanting to “passport” into the EU to access research grants, investments and customers.

The psychic cords have been severed, and politicians on both sides of the border are haemorrhaging gloomy rhetoric.

Who would have thought, at the height of the Troubles, that Martin McGuinness, the leader of Sinn Fein (and now Northern Ireland’s deputy first minister), would decry divergence from Britain.

Mr McGuinness told The Guardian on Monday: “As things sit at the moment, we are going to suffer big time. Theresa May says ‘Brexit means Brexit’, but so far as we are concerned Brexit means disaster for the people of Ireland”.

Ireland’s politicians are right to warn of economic “disaster” on both sides of the border following Britain’s exit from the EU, but it will take vision and statesmanship to reconfigure a landscape indelibly marked by British domination. The cute hoors will need to make way for the modern Charles Parnells and Michael Collins’.

With Irish exports to Britain worth £15bn a year, the slump in sterling is going to hurt, but it is also a wake-up call, ahead of an even bigger, and longer term shift, in Ireland’s social and political landscape. Sláinte!

Is the fog of Brexit beginning to clear?

Political peace in the UK is unlikely