Now ahead among DE working class

This age divide is unprecedented: in 1983, 42% of 18-24 year olds voted for Margaret Thatcher’s Tories, and only 33% voted Labour. pic.twitter.com/UJ6aeL6TOG

The gender divide…. is huge. And it’s flipped – now men are more likely to vote Tory and women for Labour pic.twitter.com/YOqDADyUJv

The decline in trade union membership vs. income inequality in the UK. Read more about why we should strengthem workers’ rights and trade unions for all people working in the UK, here https://t.co/MnvVxq5y0P #OurGovernmentToo pic.twitter.com/E7V9ylawhP

The results of the YouGov #GE2019 MRP model are finally here:

My first piece for Ipsos takes a broad look at our issues index over the past 10 years. The upshot: Brexit and the NHS up, immigration and economy down. https://t.co/qz5d1eYM2m

Must-read report – The shifting shape of UK tax: Charting the changing size and shape of the UK tax system , by @adamcorlett https://t.co/dDjfJx9ri9 pic.twitter.com/knEKpSQBre

Britain on the brink of returning to ‘peak pay’ for the first time in 12 years – but the scale of our pay downturn still leaves average pay £138 a week off its pre-crisis trajectory. pic.twitter.com/G69NgIp1Vb

Are you are one of the 4.8m passengers who uses the London Underground every day? An FT investigation found that the Tube is by far the most polluted part of the city. Find out which lines are worst: https://t.co/LbWtNF12QG pic.twitter.com/0ODtkcY9tK

An economist explains how to go carbon neutral in our lifetime https://t.co/bennfMWrMl #environment #economics pic.twitter.com/tRjCWoeH65

Latest from @ONS: “Labour productivity has continued the weak trajectory it has followed over the last year … with only a couple of relatively small sectors contributing positively. This confirms the broad base of the UK’s productivity challenges.” https://t.co/H3WZcKVwJA pic.twitter.com/w6Yu15vdg9

Highest employment level ever recorded in the euro area and the EU in Q2 2019: 241.4 million employed in the EU, of which 160.0 million in euro area https://t.co/MXIGfqQfB1 pic.twitter.com/eKQDuxdAE4

SNAP POLL: By 47% to 27% Brits say it is unacceptable for the government to suspend Parliament in the run up to Brexit https://t.co/R3fi0E2VDi pic.twitter.com/L1BYkBua4M

The North East remained the region of England with the highest age-standardised mortality rate. London remained the lowest for both males and females https://t.co/xsp5s3ZO0q pic.twitter.com/eft0WzEA9n

Fewer than half of Britons (45%) expect to ever earn £30,000 a year or more. Our new study looks at the nation’s maximum earnings expectations https://t.co/hbjHm5r9zO pic.twitter.com/H6JfcCXWbH

Public service productivity also fell in Q1 2019 as growth in inputs exceeded growth in output – although both inputs and output growth were high by historical standards https://t.co/V5rsxIp53Y pic.twitter.com/tpSzQCvqKF

Incredibly, 54% of Conservative party members would prefer their party to be destroyed rather than fail to achieve Brexit. https://t.co/KqLWAPHXij 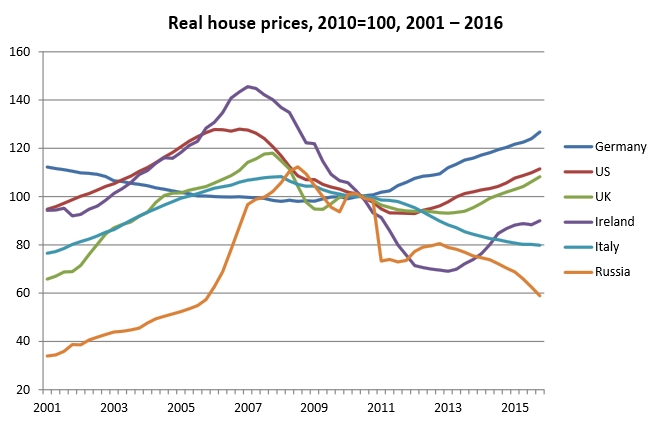 Residential property prices (real) since the new millennium have followed different paths in different countries. Ireland has seen a rollercoaster ride and the US less so, though both have seen prices start to recover in recent years. Prices in the UK stuttered around the global financial crisis (GFC) before regaining their momentum. In Italy and Russia property prices continued to fall after the GFC, quite steeply for the latter. Meanwhile, in Germany prices run counter current, slowly descending into the GFC before recovering strongly thereafter. As property asset values affect economic sentiment, the chart reveals likely differences between the selected countries. Source: OECD Analytical house price indicators, February 12 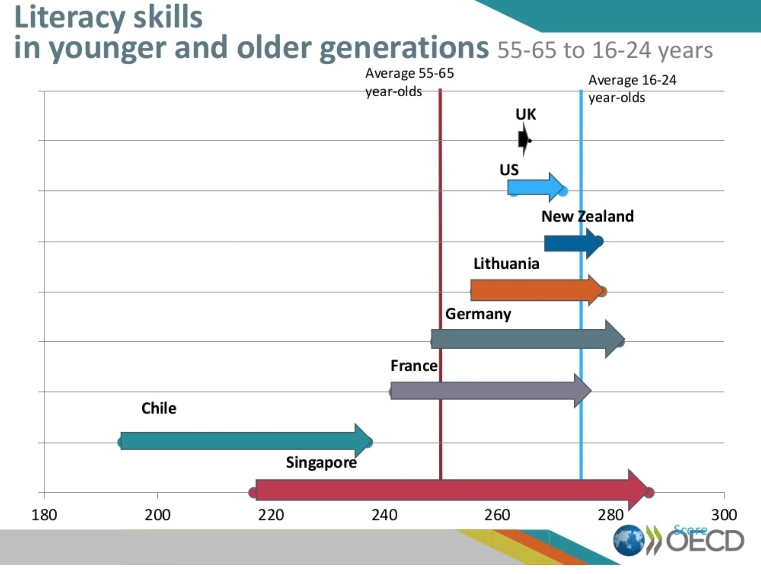 The OECD PIAAC programme conducts a Survey of Adult Skills in a number of countries. Literacy and numeracy skills tend to have a small peak between the ages of 25-34, before markedly declining for older age groups. For the UK population this decline with age is tiny. However, for literacy and numeracy skills, the UK 16-24 year age group has now been overtaken by those of the same age in many other comparable economies. Source: Skills Matter, OECD Publishing, June 2016. 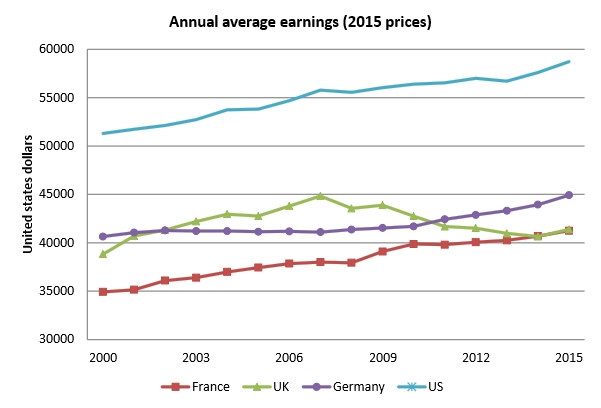 This chart shows how average earnings have changed in France, the United Kingdom, Germany and United States, with all currencies converted into $ using a purchasing power parity (PPP) adjustment that accounts for differences in the cost of household goods in the four countries. Between 2000 and 2015, annual earnings in the UK peaked at about 2007, whereas earnings in the other three counties have seen a slow but steady rise. Source: OECD 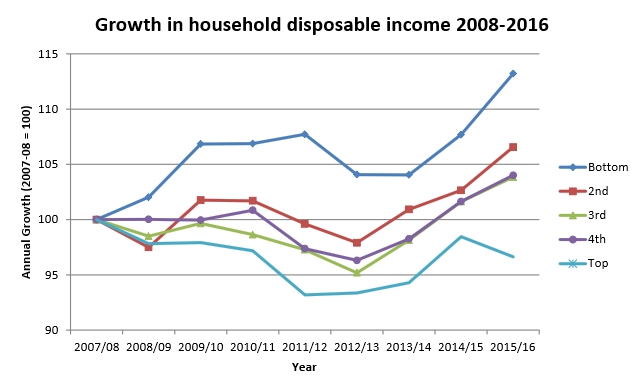