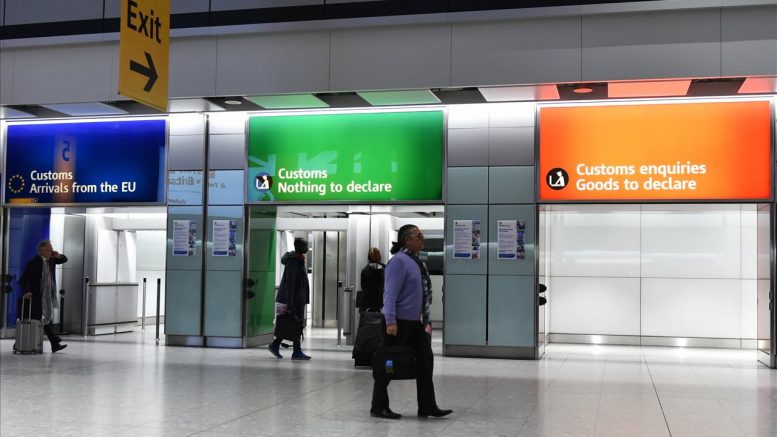 Schrödinger’s cake: the time is approaching where a 'superposition' of options must collapse into a decision

Is Prime Minister Theresa May resigned to Customs Union membership for the UK after Brexit? Murray Ritchie suspects the answer is ‘yes’.

First it was the judges who were “enemies of the people” in the words of the fiercely pro-Brexit Daily Mail, furious at the Supreme Court for siding with parliament against the government.

Now we have moved on to “peers against the people” in the view of the uber-Thatcherite Michael (now Lord) Forsyth, furious that Brexiteers in the Upper House have just suffered a stinging defeat.

His Lordship is indignant that his fellow peers voted by a surprisingly large majority to defy the government by backing Customs Union membership for the UK post Brexit. The blue funk enveloping hardline Brexiteers is intensified by senior MPs now demanding a vote on staying in the Customs Union and the European Union strangling at birth the UK’s plan for solving the Irish border problem.

Pro-EU forces hail these moves as further progress towards a soft Brexit. Indeed it is difficult to disagree that a clean break with the EU and a good deal are mutually exclusive.

Even if the Withdrawal Bill pings back and forward between the Commons and the Lords as it seems destined to do, the likelihood is that there will be no majority among MPs for giving Theresa May her way. Eventually their Lordships must give up after a respectable period and bow to the superior democratic legitimacy of the Commons. If the figures stack up, as seems increasingly likely, this acknowledgment of constitutional propriety will hand victory to the Remainers among their Lordships.

Matters are moving ever more ominously against the Prime Minister. How much longer can she hold out in the hope of Brexit meaning withdrawal from the EU and all its works?  “Brexit means Brexit” was always a meaningless phrase, or at least one offering multiple definitions. How plausible is it that she will yet interpret it as the UK leaving the EU but remaining in the Customs Union – and possibly even the Single Market – as the only possible outcome?

Suddenly there is a spring in the step of the anti-Brexit forces. Optimists among them even see some hope now of reversing Brexit or even having a second referendum on the terms. The avoidance of a hard Brexit, which still seems the only plausible alternative, is drawing closer.

Otherwise Lord Forsyth and those who think like him would not be so upset. They know the surprisingly large Lords majority will only encourage like minds in the Commons. Rebel Tories will feel a touch more confident of getting their way – although that way is still to be clearly defined.

And what of Labour? Can Jeremy Corbyn’s commitment to a customs union as distinct from “the” Customs Union be sustained if it becomes clear he could yet have the latter?

“Brexit means Brexit” was always a meaningless phrase, or at least one offering multiple definitions

Many MPs who only reluctantly respect the will of the democratic majority must now be wondering if public impatience with the whole wretched Brexit process can be put to good use. Will they find the courage to support remaining in the Customs Union against the wishes of their divided constituents by pleading the national interest?

That question is becoming more real by the day. The economic argument is intensifying as decision day looms and the people, weary of the endless Brexit mess, increasingly appear to accept the agony must end in some compromise. If leaving the EU fulfils the nation’s democratic wish (if you’re English or Welsh) then a sensible outcome might be to throw a bone to the Remainers by preserving our existing trading advantages. Scotland and Northern Ireland would happily go along with that.

After the appalling Windrush scandal and concerns over Russia and Syria, the debate about migrant workers has been rather quietened. MPs can bet safely now that a return to the Irish Troubles if the border issue is unresolved will loom more menacingly than immigration.

Any sort of deal that excludes the Customs Union seems out of the question. Recent noises from Brussels indicate that the EU is playing hardball – and that means there can be only one winner on that issue. Remaining in the Customs Union or the Single Market now seems unavoidable.

Brexit has doubtless many twists and turns to come, possibly sooner than we think as the Lords continue their debates. Yet it does seem that the tide is turning, and Mrs May is today’s Canute. 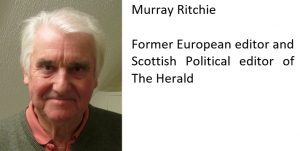 Aviation caught in battle of Brexit

£2bn lost to criminals in furlough cash fraud
Organised criminals have siphoned off up to £2 billion intended for furloughed workers, tax officials believe. HM Revenue and Customs has estimated that between 5 and 10 per cent of £39bn in payments made under the Treasury’s job retention scheme are likely to have been claimed fraudulently. Of these, it is “almost certain” that more than half has been paid to organised criminals posing as legitimate businesses to make claims under the emergency scheme, tax officials have told the National Audit Office. As well as organised crime, the NAO said that other types of fraud included employers making furloughed employees work or inflating claims. The Times, October 23

England’s Covid contact-tracing hits new low
Boris Johnson and his chief scientific adviser have admitted to failings in England’s £12bn test-and-trace system as contact-tracing fell to a new low and waiting times for test results soared to almost double the target. Under pressure to explain new figures showing less than 60 per cent of close contacts being reached, while test turnaround times rose to nearly 48 hours, the prime minister said: “I share people’s frustrations and I understand totally why we do need to see faster turnaround times and we need to improve it”. The system, designed to contain outbreaks by ensuring anyone exposed to the virus self-isolates, was helping “a bit”, Johnson added. “The thing depends on people self-isolating and breaking the transmission. It is helping a bit already to break the transmission. About 1m contacts have been reached. But there is more that it can do if everybody complies once they are contacted by NHS Test and Trace.” The Guardian, October 22

Outrage at Rishi Sunak’s England-only jobs fund
Nicola Sturgeon has insisted it is “intolerable and unacceptable” that coronavirus funding in England will not lead to extra cash being given to the Scottish government. Rishi Sunak, the chancellor, announced billions of pounds of extra help for companies and workers affected by Covid-19 restrictions in England. Scottish Tories hailed the “blockbuster support” from the UK government, but Ms Sturgeon said the chancellor had told the Scottish ministers that the new measures “won’t deliver any upfront extra cash for Scotland” beyond £700 million of funding that has already been pledged. The first minister hit out on Twitter, saying: “Businesses in England have been given, rightly, an open-ended commitment to support for as long as needed.” But she added that the Scottish government “will be expected to match that for Scottish businesses – with no confirmation that the money will be there to pay for it, and no borrowing powers to raise it”. The Times, October 23

UK seals first big trade deal with Japan
The UK has completed its first large post-Brexit trade deal after signing an agreement with Japan that will take effect from January 1. Liz Truss, the UK’s international trade secretary, signed the agreement with Toshimitsu Motegi, the Japanese foreign minister, in Tokyo on Friday. The pact, negotiated in just a few months over the summer, is seen by the UK government as an important demonstration of its ability to reach new trade deals outside the EU … The new deal largely replicates the existing EU-Japan deal, but has an extra chapter on digital trade and lacks the quotas for agricultural exports such as cheese that Brussels wrested from Tokyo during years of talks. Instead, the deal allows the UK to use any agricultural quotas left over by the EU. British officials are confident there will be enough space in the quotas to maintain and increase the UK’s food exports to Japan. Financial Times, October 23

Barclays warns of cuts as Covid pushes bad debt charges to £4.3bn
Barclays has warned of potential cost cuts as the economic fallout from the Covid-19 pandemic pushed its total bad debt provisions to £4.3bn. The lender has put aside another £608m to help cover a potential surge in customer defaults. It came as Barclays beat profit forecasts for the third quarter of 2020. While this latest increase was less than the £1bn forecast by analysts, it brings Barclays’ total credit impairment charges to £4.3bn for the nine months to September. Earlier this year, a spokesperson for the bank confirmed that Barclays could be forced to put aside up to £4.5bn to cover bad debts. The Guardian, October 23

Consumer confidence drop fuels recession fears
UK consumer confidence, spending and mobility dropped in October as coronavirus infections rose and restrictions tightened across the country, fuelling fears of a double-dip recession. Data from research company GfK showed that the UK consumer confidence index tumbled 6 percentage points to minus 31 in the first half of October. This is the lowest reading since May, with consumers becoming more pessimistic about both the general economic situation and their personal financial conditions. Financial Times, October 23

UK shoppers give retail sales another boost
Shoppers gave the UK retail sector an unexpectedly big boost last month, increasing spending at the fastest annual rate in more than a year with purchases at furniture and gardening stores leading the way. Retail sales in September were 4.7 per cent above their level in the same month last year, marking the fastest pace of growth since April 2019, according to data from the Office for National Statistics published on Friday. Spending came in 5.5 per cent above the level immediately before the pandemic in February. The figures suggest consumers continued to support the UK’s fragile economic recovery in September, but economists said the new round of Covid-19 restrictions across the country posed a severe threat to continued growth. Financial Times, October 23

Ministers move north in civil service shake-up
Ministers will be told to leave London and work in the “great northern cities” in one of the biggest shake-ups of the civil service ever attempted, Boris Johnson said. The prime minister pledged to move entire departments from Whitehall outside the capital to fulfil his pledge to “level up” the country. Under the plans about a quarter of the 92,000 civil servants who work in the capital would move to the regions by the end of the decade. The Treasury has announced plans to create an “economic campus” in the north and other departments, such as Work and Pensions and the Home Office, could also move. Speaking to northern business leaders, Mr Johnson said: “We will move departments of state, ministers, private offices and all, to great northern cities and regions that represent the future of this country.” The Times, October 23

Trump and Biden row over Covid, climate and racism
US President Donald Trump and his White House challenger Joe Biden clashed over Covid and race while trading corruption charges, in their final live TV debate. On the pandemic, Mr Biden would not rule out more lockdowns, while Mr Trump insisted it was time to reopen the US. Mr Trump cited unsubstantiated claims Mr Biden personally profited from his son’s business dealings. The Democrat brought up Mr Trump’s opaque taxes. Mr Biden has a solid lead with 11 days to go until the presidential election. But winning the most votes does not always win the election, and the margin is narrower in a handful of states that could decide the race either way. More than 47 million people have already cast their ballots in a voting surge driven by the pandemic. This is already more than voted before polling day in the 2016 election. There are about 230m eligible voters in total. BBC news, October 23