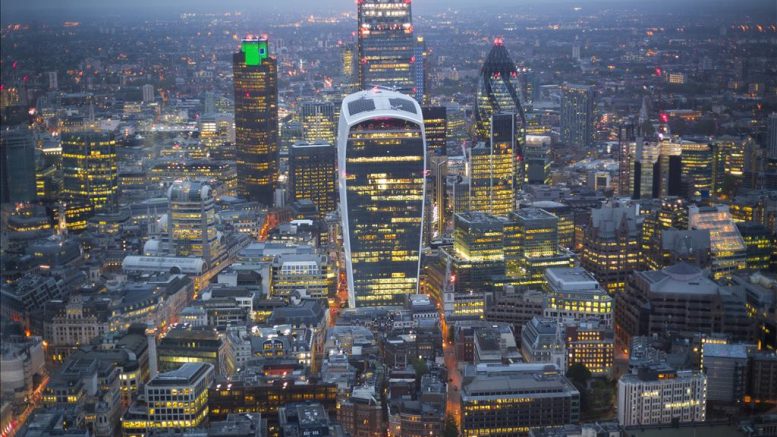 The City of London has grown into the financial capital of Europe partly thanks to its EU passport. Credit: © Antoine Buchet

Up to 35,000 jobs and £5 billion of annual tax revenue could be at risk if the May Government pursues a hard Brexit, a parliamentary committee will be told today.

Miles Celic, chief executive of TheCityUK, the financial services lobbying group, will tell the House of Lords European Union Financial Affairs committee that, without continued access to European markets and “passporting rights”, the sector could be badly hit.”

A spokesman for TheCityUK told Chief-Exec.com yesterday that the financial and related professional services industry “contributes more tax than any other sector and employs nearly 2.2 million people right across the country”.

Mark Boleat, policy chairman at the City of London Corporation – the local authority for the traditional heart of the financial centre – last week stressed the importance of the role of financial services which generates “a trade surplus of about £47bn a year”.

City representatives are concerned about the impact a hard Brexit will have on the UK financial sector and its ability to retain its “EU passport” which allows companies to sell financial services across Europe without restrictions.

“Mutual market access is a central issue for the financial and related professional services industry in the Brexit negotiations, with passporting an important part of that for a considerable number of firms within the banking sector and beyond”, TheCityUK spokesman said.

“It should absolutely be factored into the negotiations and form part of the final Brexit deal.”

Mr Celic, who is working closely with Government, said that he wants to secure “the best possible access for the services sector”.

The British Bankers’ Association (BBA) chief executive, Anthony Browne, said last week that “the EU’s passporting regime had been a key factor in enabling the UK to grow as the financial capital of Europe”.

It enables “UK-based banks to serve customers across the single market efficiently, without duplication and at low cost” – with 5,476 UK-based companies holding 336,421 passports – Mr Browne said.

Major US banks and employers in the UK, including Goldman Sachs, Citi and JP Morgan, who use the City of London as a gateway to the EU, have also raised concerns about retaining access to the single market and passporting rights.

In an attempt to reassure Wall Street and the City the Chancellor, Philip Hammond, said last week as he stopped in New York en route to the annual IMF meeting in Washington DC that London will remain a leading financial centre after Brexit.

Sir Jon Cunliffe, Deputy Governor of the Bank of England, Huw Evans , Director General of the Association of British Insurers and Stefan Hoffman, Head of European Affairs at the Swiss Bankers’ Association will also give evidence before the committee.

EU to profit as banks consider their future

Barclays eyes Scotland as post-Brexit base