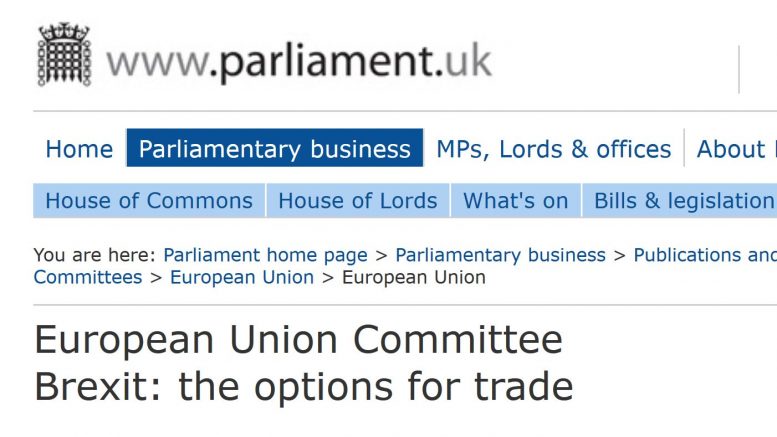 Troubled trade: finding the way to become a global leader of free trade is not so easy as it once appeared

An influential committee of the UK parliament has warned that Britain faces big post-Brexit obstacles to reaching a free trade agreement (FTA) with the European Union if it were to leave the European Single Market.

The report, Brexit: the options for trade, also warns that the UK will have little prospect, after Brexit, of continuing to have the level of access to third countries that it now enjoys through its membership of the EU.

In a salutary report about the outlook for British trade options once it ceases to be a member of the EU, a House of Lords Select Committee says there is virtually no prospect that the UK will be able to reach new trading relationship terms with the EU within the two year deadline set for completing the Brexit process.

This is because Brexit will fundamentally change the terms of Britain’s trade with the 27 EU member nations and with the rest of the world.

This report considers the principal possible frameworks for trade after this time, namely joining the European Economic Area (EEA), a customs union with the EU, a Free Trade Agreement (FTA) or trade based on World Trade Organization (WTO) rules. It asks whether they might be modified—in line with the Government’s desire for a “bespoke UK agreement”— and explores the implications of the different options for the sequencing and timeline of negotiations.

It warns that the UK is entering “unchartered waters”.

And it also warns that if the EU is to agree to a FTA with Britain, Britain will be required to adopt EU laws and regulations – a prospect unlikely to appeal to Brexiters.

The committee concludes that with little chance of a FTA being able to be agreed within the Brexit timetable it is vital that the government make it clear from the outset that it will negotiate transitional arrangements which will protect the British economy.

“We urge the Government to establish at the outset of negotiations a clear strategy for a future transitional agreement, with specific proposals as to what form it should take,” the report concludes.

Democratic dominos line up. Will they fall?

UK has opted out of EU coronavirus vaccine programme, sources say
The UK government has rejected the chance to join the European Union’s coronavirus vaccine programme due to concerns over “costly delays”, according to sources. The EU is planning to spend around €2bn (£1.8bn) on the advance purchase of vaccines that are undergoing testing on behalf of the 27 member states. Negotiations with Brussels have been ongoing but Alok Sharma, the business secretary, is believed to have opted out of the opportunity, according to The Daily Telegraph. The European commission is expected to be notified on Friday. The decision not to participate is expected to provoke a backlash among opposition MPs, who believe that ministers are reluctant to collaborate with the EU on projects after Brexit. The Guardian, July 10

Junk food deal ban in PM’s assault on obesity
Boris Johnson is expected to take the first steps of a promised anti-obesity drive with a ban this month on supermarket promotions of unhealthy food. The prime minister is likely to hold off on introducing a 9pm watershed on the advertising of unhealthy food, however, disappointing campaigners. Mr Johnson, who had declared himself “very libertarian” on food choices, has said that the coronavirus had convinced him that urgent action was needed. In what allies insisted was only a first set of interventions, shops will be prevented from offering buy one, get one free deals on targeted products. A ban is also expected on sweets and chocolates promoted at the end of supermarket aisles and entrances. No 10 is also considering reviving plans for compulsory calorie counts on restaurant and takeaway menus. Britain is the second fattest European nation, a fact that is likely to have worsened its death toll from the virus. The Times, July 10

Turkish minister says UK trade deal is very close
Turkey is “very close” to signing a free trade agreement with the UK covering manufactured goods, agriculture and services, Turkey’s foreign minister has said. Mevlut Cavusoglu told the FT that in principle there were no differences over the deal, but added that some technical issues needed to be finalised. “It’s going very well and we are very close to finalising it,” said Mr Cavusoglu, who was in London where he met Boris Johnson, UK prime minister, and his foreign secretary Dominic Raab. “If you look at the volume of our bilateral trade, 95 per cent of it is industrial products, and we agreed on that … and 5 per cent is agriculture and services.” The UK is Turkey’s second-largest trade partner after Germany, and securing an FTA with Britain is deemed critical for Turkish manufacturers, particularly carmakers, textile factories and white goods producers. Financial Times, July 10

Quarantine end for dozens of destinations
Travellers arriving in the UK from dozens of countries no longer have to self-isolate for two weeks from Friday. The rules are being relaxed for arrivals from 75 countries and British overseas territories. However, Scotland still requires people travelling from Spain to quarantine – unlike England, Wales and Northern Ireland. The Foreign Office’s advice against taking a cruise holiday remains in place. From Friday morning, people arriving in the UK from France, Italy, Belgium, Germany and dozens of other countries will no longer have to spend 14 days in quarantine. But people who arrived from those countries at an earlier point in the last two weeks will still be expected to complete their period of isolation, the government said. BBC news, July 10

Unis ‘pander to Chinese censors’
A group of British universities is devising courses in line with the censorship rules of the Chinese government. Four institutions are piloting a new online teaching platform for students in China which will allow them to continue or start degrees at UK institutions even if they stay at home in the autumn term because of the pandemic. However, the students will receive only government-approved materials. The pilot scheme involves King’s College London, Queen Mary University of London, and York and Southampton universities. It is run by Jisc, which provides digital services for higher education. The teaching link has been provided for free by Alibaba Cloud, the Chinese tech giant, creating a virtual connection between students and the online network of their UK university. The Times, July 10

Deloitte faces record £15m fine for failings in Autonomy audit
Deloitte faces a record £15 million fine for “serious and serial” failings in its audit of a software company at the centre of one of the country’s largest civil fraud cases. The Financial Reporting Council wants to impose the fine after its disciplinary tribunal found that Deloitte and two of its former partners had failed to meet their public interest duty as auditors of Autonomy. Deloitte, one of the Big Four accounting firms, audited Autonomy’s accounts before the company’s sale to Hewlett-Packard for $11 billion in 2011. A year later $8.8bn was written off the value of Autonomy, $5bn of which was attributed to “accounting improprieties”. The Times, July 10

EU students to pay tuition fees in Scotland
European students will be charged for university tuition in Scotland for the first time in over a decade after ministers moved to ease the sector’s cash crisis. It is a significant policy change for the SNP, coming four years after John Swinney, the deputy first minister, vowed to protect free education for EU students after Brexit. Universities Scotland, the industry body, said that the combination of new revenue from EU students and savings from a policy thought to cost £97 million a year would “shift the public funding of degree places on to solid ground for the first time in years”. The Times, July 10

Supreme Court says Trump cannot shield tax returns for ever
President Trump has lost his attempt to shield his tax returns from prosecutors indefinitely. His claim of immunity was rejected in a Supreme Court ruling backed by the two conservative justices he appointed. Neil Gorsuch and Brett Kavanaugh joined a ruling that the president was not above the law when tax returns were demanded, although the case was sent back to a lower court for arguments over the scope of the release. In a second ruling, the Supreme Court sent cases brought by three Democrat-controlled committees back to lower courts for further review because the office of the president has greater protection from politically motivated investigation. The Times, July 9

HK banks audit client exposure to US sanctions
US and European banks in Hong Kong are conducting emergency audits of their clients to identify Chinese and Hong Kong officials and corporates that could face US sanctions over a new national security law. Donald Trump, US president, is expected to sign into law as early as next week the Hong Kong autonomy act. The legislation gives the administration the power to impose sweeping sanctions on officials accused of undermining Hong Kong’s semi-autonomous status, as well as banks and state entities that do “significant transactions” with them. At least two large international banks in Hong Kong were studying which of their clients and partners might be exposed to sanctions under the act and with which they might have to terminate their business relationships, people familiar with the matter told the FT. Financial Times, July 9

John Lewis and Boots to cut 5,300 jobs
Two of the UK’s biggest High Street retailers, John Lewis and Boots, have announced 5,300 job cuts. Boots has said 4,000 jobs will go, while John Lewis is shutting down eight stores, putting 1,300 jobs at risk. The moves come amid warnings that new economic support from Chancellor Rishi Sunak will not be enough to stop millions of workers losing their jobs. Mr Sunak admitted that he would not be able to protect “every single job” as the UK enters a “severe recession”. Boots is consulting on plans to cut head office and store teams and shut 48 of its more than 600 Boots Opticians practices. It has not yet said which outlets will close, but about 7 per cent of its workforce will lose their jobs. BBC news, July 9