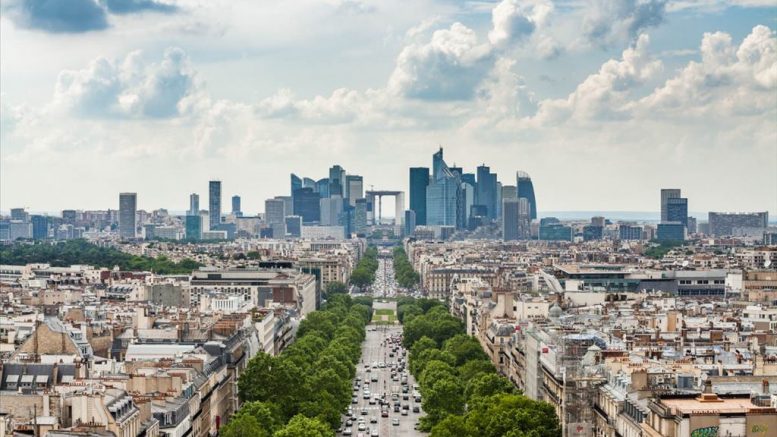 Banking on Paris: up to 10,000 people could move to the French capital's financial sector over the next few years

As the UK government seems determined to pursue a hard Brexit, banks in the City are planning to shift some operations and thousands of jobs to other European Union countries to ensure full access to the EU’s single market.

The French finance minister, Michel Sapin, said in Paris last week that some US banks, which employ about 25,000 people in the UK, have decided that “activities will be transferred to the continent” as Britain is about to leave the EU.

“Until now their question was whether Brexit will happen or might it take longer than expected. That’s over,” Mr Sapin said.

They are telling us clearly that there will be a transfer of activity. It’s no longer a question of if but when. I don’t know to what extent or which ones.”

Meanwhile France is working on promoting Paris as the “future financial capital”.

“Tired of the Fog? Try the Frogs!” is the title of an advertising campaign launched on Monday that promotes Paris’ financial district La Défense, featuring posters at London’s Heathrow Airport and Eurostar’s London terminus, St. Pancras.

France’s financial regulator, the Financial Markets Authority (AMF), also announced a few weeks ago that it is “simplifying and speeding up licensing procedures” for UK-based financial companies wishing to relocate their operations in Paris, including a fast-track “pre-authorisation” programme.

The French government is next month set to debate its promised tax breaks for UK-based companies, including benefits for expatriates such as income tax breaks of up to 50 per cent and the right to exclude overseas assets from the wealth tax for eight years.

Arnaud de Bresson, chief executive of Paris Europlace, the financial lobby group, who attended this week’s Brexit & Global Expansion summit in London, told Reuters: “our estimate is that close to 10,000 people involved in the financial sector could move from London to Paris in the next few years, and Paris is getting fully organised for that”.

Germany is another major European financial centre hoping to woo banks away from London after Brexit, even considering changing its restrictive labour laws to make Frankfurt a more attractive destination.

Also speaking at the London summit, Hubertus Vaeth, head of Frankfurt Main Finance, which promotes Frankfurt as a financial centre, said that UK-based banks would be moving some operations to Germany in the second half of 2017.

However, a report released on Monday by pan-European think tank Open Europe claims that London-based businesses and jobs in the financial sector might actually go to the United States or Asia, not Europe.

Stephen Booth, a co-author of the report and acting director of Open Europe, said: “It is not obvious that business[es] moving out of the UK would relocate to another European hub: New York, Singapore or Hong Kong would be just as well, if not better, placed to reap the benefits”.

This was echoed by James Gorman, chief executive of Morgan Stanley, who said earlier this month at the Institute of International Finance’s (IIF) annual meeting in Washington DC that “the big winner [from] Brexit will be New York; you’ll see more business moving to New York”.

A spokesman at TheCityUK, also told Chief-Exec.com last week: “there has been some suggestion that [financial] jobs are more likely to move out of Europe altogether rather than move to another part of the EU”.

The London-based think tank, which downplayed the importance of passporting rights – “important to business in some sectors, less so in others” – also stressed in its key recommendations the significance of the City as not only benefiting the UK but also Europe.

“The UK needs to convince the EU that keeping cross-channel financial markets open is a mutual interest,” Open Europe said.

“Throughout the negotiating process, the UK should make it clear to its European partners that this is not a ‘zero-sum game’ and think creatively about how to ensure that the new trade arrangements benefit EU companies and governments.”

Barclays eyes Scotland as post-Brexit base

The City takes its fight to the House

Home Office is racist, said Windrush report
A report that concluded the Home Office was “institutionally racist” over its “hostile environment” policy towards migrants has been toned down, The Times has been told. The Windrush review, commissioned in 2018 after Caribbean migrants were detained or deported despite having the right to live in Britain, was originally intended for publication at the end of March last year. The phrase “institutionally racist” was included in an early draft of the report but no longer appears in more recent versions, according to sources familiar with the review. Publication of the report has been repeatedly delayed and previous leaked extracts found that the department was “reckless” and had developed a “defensive culture” over immigration policy. The Times, February 21

English football divided over post-Brexit visas
December’s general election victory for Boris Johnson may have settled the long-running Brexit argument, with the UK formally leaving the EU at the end of last month and triggering a transition period while both sides thrash out a new trading relationship. But power brokers running the country’s favourite sport remain divided. For months they have been battling over how to deal with new immigration rules for overseas footballers playing in England after December 2020, which will come into force when freedom of movement between the UK and the 27-nation bloc ends … While Premier League players are among the country’s top earners, after the Brexit transition ends those coming from the EU can expect to be treated the same as stars from other parts of the world. But the UK government has demanded the Football Association, Premier League and English Football League, the body that runs the professional club divisions below the top tier, make a joint proposal for how immigration rules should affect football once the country has secured a new trade deal with Brussels. Financial Times, February 21

Immigration rules post-Brexit could fuel modern slavery, say charities
The proposed closure of UK borders to low-skilled workers after Brexit risks driving vulnerable EU citizens into modern slavery, charities have said. They warned the ban will lead to a boom in a black market for low-paid workers that will be exploited by criminals and lead to coercion and abuse. The charities say it will harm EU citizens already in the country who may not know their legal rights post-Brexit and others lured by a glut of cash-in-hand jobs in restaurants, offices, farms and construction sites, who will risk being brought into the country by traffickers. One charity, the East European Resource Centre, fears some businesses will be happy to hire undocumented workers if the supply of low-skilled workers is choked off by the immigration policy. “Let’s not kid ourselves: someone will have to do the dirty, low-paid jobs, from construction to food processing to social care. Where are these workers going to come from?” said Barbara Drozdowicz, the centre’s chief executive. The Guardian, February 21

EU stuck in budget summit as rifts laid bare
EU leaders were deadlocked over the bloc’s next multiannual budget after lengthy summit talks on Thursday night laid bare rifts over how to fill the €60bn to €75bn funding gap created by Brexit. Charles Michel, the European Council president, spent much of the night locked in one-to-one talks with leaders as he attempted to end an impasse over the 2021-27 spending plans. However, a rebellion by Germany and other northern European countries over plans to slash rebates they receive on their EU budget contributions overshadowed the discussions. Britain’s departure has left the EU struggling to finance ambitious policies to fight climate change, aid poorer regions and subsidise farmers without placing heavier burdens on richer northern European countries that have baulked at proposals tabled by Mr Michel so far. Financial Times, February 21

Varadkar to be caretaker leader as all nominees fail to become taoiseach
Leo Varadkar goes to a European Council meeting next month as a caretaker leader after surrendering his seal of office as taoiseach at Áras an Uachtaráin last night. The Fine Gael leader failed to win the confidence of the Dáil in votes on the nomination of a taoiseach last night. He will stay on as caretaker head of government, meaning that he will be a figurehead only at the first summit since Brexit in Brussels in March, with no executive power. Fine Gael negotiators still believe they can agree a rotating taoiseach arrangement with Fianna Fáil in a grand coalition with a smaller party and a handful of independents. Meaningful discussions have yet to begin, however. The Times, February 21

Russia meddling to help Trump win re-election
US intelligence agencies have warned that Russia is attempting to help President Donald Trump get re-elected in November, US media report. The comments came in a closed-door briefing to the House Intelligence Committee on 13 February, officials told US outlets. President Trump was reportedly enraged, complaining that Democrats would use the information against him. He replaced his acting intelligence chief, Joseph Maguire, on Thursday. The New York Times reported that Mr Trump was particularly angry that Adam Schiff, the Democrat who led the impeachment proceedings against him, was at the briefing. Mr Trump, impeached by the House of Representatives for abuse of power and obstruction of Congress, was acquitted after a two-week trial in the Republican-controlled Senate. BBC news, February 21

House coal and wet wood burnt out by 2023
The sale of the most polluting fuels burned in household stoves and open fires will be phased out from next year to clean up the air, the government has said. Plans to phase out the sale of house coal and wet wood have been confirmed as part of efforts to tackle tiny particle pollutants known as PM2.5, which can penetrate deep into lungs and the blood and cause serious health problems. Wood burning stoves and coal fires are the single largest source of PM2.5, contributing three times as much of the pollution as road transport, the Department for Environment, Food and Rural Affairs said. Sales of two of the most polluting fuels, wet wood and house coal, will be phased out from 2021 to 2023, to give householders and suppliers time to move to cleaner alternatives such as dry wood and manufactured solid fuels. These produce less smoke and pollution, and are cheaper and more efficient to burn, officials said. The Guardian, February 21

Coronavirus: Car sales in China fall 92% in Feb
Car sales in China fell 92 per cent in the first half of February as the coronavirus shutdown took its toll, according to an industry trade body. Car dealerships have remained closed while buyers have stayed away to prevent the spread of the deadly virus. Nationwide car sales slumped 96 per cent in the first week of February to a daily average of just 811 vehicles. The China Passenger Car Association said it hoped sales would pick up as more showrooms reopened. “There was barely anybody at car dealers in the first week of February as most people stayed at home,” said CPCA secretary general Cui Dongshu. BBC news, February 21

Barclays scraps spyware that kept staff at desk
Barclays has scrapped the use of surveillance software that monitored how employees were spending their time after it was deemed to be “creepy” by privacy experts. The bank ditched the software one week after installing it after a backlash from the public and staff who said they were afraid to leave their desks to get water or go to the lavatory. The system was installed in the bank’s investment division in an effort to boost productivity. It told managers how long an employee was spending on certain tasks to monitor the “effectiveness” of their time. However, staff said the program would tell them to “avoid breaks” and recorded visits to the toilet as “unaccounted activity”. The Times, February 21