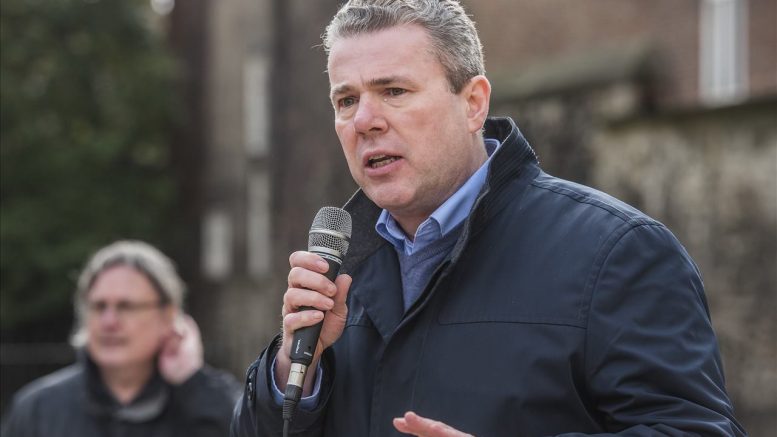 About £36 billion in taxes were not collected, avoided or evaded last financial year, according to a report produced by HM Revenue & Customs.

However, the “tax gap” – the difference between the amount of tax that could be collected by HMRC against what is actually collected – had fallen from 6.9 per cent to 6.5 per cent.

The Public and Commercial Services (PCS) union said the amount of revenue lost was closer to £100bn, rather than £36bn, and called on the government to shelve plans to close more than 100 offices across the UK, with the loss of thousands of jobs.

The PCS general secretary, Mark Serwotka, told Chief-Exec.com yesterday that since 2010 about 10,000 jobs had been cut from HMRC and the department planned to cut another 10,000 staff by 2021.

“The fact that the tax gap remains persistently high – even by HMRC’s own estimate – shows that there aren’t enough staff in compliance [roles] and, rather than just remaining stable, the department should employ more and direct them more effectively,” he said.

Mr Serwotka said the government must invest in HMRC if it is serious about tackling tax avoidance and evasion.

“Instead the Tories continue to cut its budget, leading to office closures and job losses,” he said. “Staff at HMRC work incredibly hard collecting and administering the taxes that fund the other public services we all rely on every day of the week.”

A spokesman for HMRC said the department had too many expensive, isolated and outdated offices which made it difficult to collaborate, modernise ways of working, and make the changes needed to transform its service to meet customer needs and clamp down further on the minority who tried to cheat the system.

“The new regional centres will bring our staff together in more modern and cost-effective buildings in areas with lower rents,” he said.

“They will also make a big contribution to the cities where they are based, providing high-quality, skilled jobs and supporting the Government’s commitment for a national recovery that benefits all parts of the UK.” 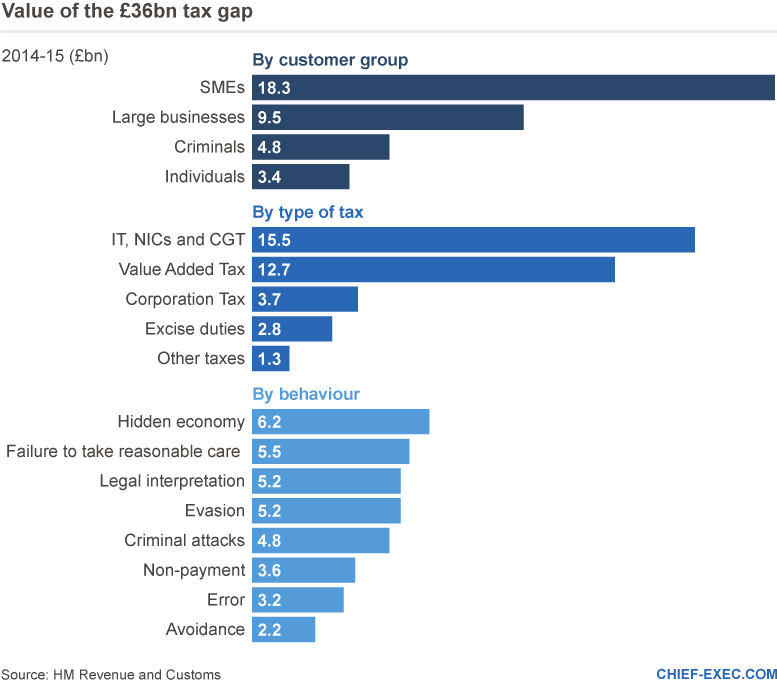 The spokesman said HMRC had been relentless in its crackdown on tax evasion and avoidance, taking action to prevent such behaviour at the outset, and to detect and counter it effectively where it persisted. During the last Parliament, HMRC secured £100bn in additional compliance revenue as a result of actions taken to tackle evasion, avoidance and non-compliance, he said.

The HMRC report said that over the past 10 years the tax gap had closed from 8.3 per cent to 6.5 per cent.

“Just over half of the 2014-15 tax gap can be attributed to small and medium-sized enterprises, known as SMEs, and just over a quarter from large businesses. The remainder is split between criminals and individuals.

Democratic dominos line up. Will they fall?

Be the first to comment on "£36bn in missing taxes"

Israel steps up battle against communal violence
Israeli security forces struggled to quell worsening communal violence in its cities as the military stepped up its assault in Gaza against Palestinian militant group Hamas. Jews and minority Israeli Arabs clashed in several Israeli towns overnight as Prime Minister Benjamin Netanyahu vowed to subdue riots with “a lot of force”. The worst domestic unrest in years escalated with a soldier beaten in Jaffa, a police officer shot in Lod and another synagogue set on fire, according to Israeli media. Outbreaks of mob violence were reported around the country as large groups of Israeli Arabs and Jewish men defied curfews. The brawls between Israeli citizens came as the military added tanks and artillery to its five-day air campaign against Hamas. The military operation has killed 119 Palestinians, including 50 women and children, according to health officials in Gaza. “We are dealing with a campaign on two fronts – in Gaza [and] in Israel’s cities,” Netanyahu said late on Thursday. An Israeli military spokesperson told reporters early on Friday that ground troops had moved into Gaza, but later clarified that none had entered the impoverished territory of 2m. Financial Times, May 14

Vaccination race to hold back Indian strain
Ten million people could have their second doses of coronavirus vaccines brought forward as the government attempts to stop a faster spreading Indian variant from delaying the end of restrictions. Cases of the variant have more than doubled in a week and Boris Johnson said yesterday that he was “anxious” about the threat posed by the strain to the route out of lockdown. Indoor mixing will go ahead as planned on Monday despite calls yesterday from scientists and Dominic Cummings for it to be postponed. But modelling for Sage has concluded that if the variant is much more than 30 per cent more transmissible than the Kent strain it would be a big risk not to delay the final easing of restrictions next month. The Times, May 14

Calls for post-Covid ‘revolution’ in air quality
Dozens of the world’s top experts in how diseases spread have called for big improvements to the air in buildings. They say current rules on ventilation are failing to stop infections, including Covid-19. The problem is likened to the health crisis caused by contaminated water in Britain’s cities in the 1800s. The appeal comes amid growing evidence that the coronavirus is often transmitted via infectious aerosols in crowded indoor spaces. Writing in the journal Science, the scientists and engineers say that while governments have regulations on the safety of food, sanitation and drinking water, there’s far less emphasis on pathogens in the air. They say that’s partly because it’s easier to identify a single water pipe or package of food that might be the cause of an outbreak than to track down an airborne source. They also say that building designers have for decades focused on keeping people at a comfortable temperature or on saving energy. Now, the article argues, there’s evidence from studies of cases in restaurants, ships and schools that respiratory infections can be passed through the air. BBC news, May 14

Longer gap between Pfizer jabs boosts antibody response in elderly
Extending the interval between doses of the BioNTech/Pfizer vaccine from three to 12 weeks strengthens the antibody response in elderly people, according to a UK study. The researchers at Birmingham university, working in collaboration with Public Health England, said their findings vindicated the UK government’s controversial decision in December to wait 12 weeks between first and second doses rather than the 21 days recommended by Pfizer’s clinical trials. “The advice to prioritise first doses, so as to provide a greater public health impact and save more lives, was considered quite bold at the time but the data shows that it has paid off,” said Gayatri Amirthalingam, a PHE epidemiologist and co-author of the study, which has not yet been peer-reviewed. The study involved 172 people aged 80-99, who each received two shots of the Pfizer vaccine. Of the group, 73 had a 12-week interval between doses and 99 a three-week interval. Peak levels of neutralising antibodies, reached 2-3 weeks after the second jab, were 3.5 times higher on average in the group with the extended gap. Financial Times, May 14

EU citizens arriving in UK being locked up and expelled
EU citizens are being sent to immigration removal centres and held in airport detention rooms as the UK government’s “hostile environment” policy falls on them after Brexit, according to campaigners and travellers interviewed by the Guardian. Europeans with job interviews are among those being denied entry and locked up. They have spoken of being subjected to the traumatic and humiliating experience of expulsion, despite Home Office rules that explicitly allow non-visa holders to attend interviews. Confusion about whether EU citizens can explore the UK job market and then go home with an offer in order to apply for a work visa has added to the growing number of detentions. In other cases, visitors are clearly breaking rules, such as those now barring EU citizens from taking up unpaid internships. At least a dozen European citizens – mostly young women – were detained and expelled at Gatwick airport alone over 48 hours last week, two female Spanish detainees told the Guardian … Other countries whose citizens have been held at a UK airport or detention centre include Italy, France, Bulgaria and Greece. The Guardian, May 13

Tougher laws to make fake news a crime
Spreading fake news on behalf of a hostile state like Russia or China could become a crime under government plans to overhaul the Official Secrets Act. Priti Patel, the home secretary, has published proposals to create a number of new offences to modernise Britain’s “outdated” laws to combat evolving threats. The changes would also increase prison sentences for breaches of the Official Secrets Act. Currently only espionage carries the maximum 14-year sentence, with all other offences, including the leaking of official secrets, carrying only a two-year limit. Sabotage, economic espionage and foreign interference are threats that need to be countered by creating new standalone offences, say the proposals. The Times, May 14

Cameron defends his lobbying of ministers
David Cameron has defended his lobbying of UK ministers and officials on behalf of Greensill Capital, insisting it was to benefit the economy rather than preserve the value of his share options in the company. The former prime minister, giving his first public comments about Greensill since it collapsed in March, refused to say how much money he was on track to earn from the supply-chain finance company before it went into administration. Industry figures have told the FT that Cameron had shares worth close to 1 per cent of the value of Greensill. The company was at one point valued at $7bn. But Cameron told the House of Commons Treasury select committee that suggestions of a potential windfall for him from Greensill were “completely absurd”. He declined to say what the actual figure was but said he had share options and was paid a “generous amount, far more than I earned as prime minister”. Financial Times, May 13

Global shortage of computer chips could last two years, says IBM boss
The shortage of computer chips plaguing industries around the world and helping to fuel inflation could last another two years, the boss of IBM has said. With the global car industry estimated to lose $110bn this year thanks to the chip shortage, IBM’s president, Jim Whitehurst, told the BBC on Friday that the tech industry was struggling to keep up with demand brought on by the reopening of the world economy. Some factories were forced to close when the pandemic first struck in 2020. The backlog in production was compounded by soaring demand for chips from a boom in sales of laptops, game consoles and mobile phones as people were forced into lockdown. The Guardian, May 14

US fuel pipeline ‘paid hackers $5m in ransom’
A major US fuel pipeline has reportedly paid cyber-criminal gang DarkSide nearly $5m (£3.6m) in ransom, following a cyber-attack. Colonial Pipeline suffered a ransomware cyber-attack over the weekend and took its service down for five days, causing supplies to tighten across the US. CNN, the New York Times, Bloomberg and the Wall Street Journal all reported a ransom was paid, citing sources. Colonial said on Thursday that it would not comment on the issue. On Friday, Japanese consumer tech giant Toshiba said its European division in France had been hit by the same cyber-criminal gang. BBC news, May 14

Developers who fail to build new homes face ‘use it or lose it’ tax
Developers will face new “use it or lose it” taxes for failing to build homes on land that already has planning permission amid concerns that more than 1.1 million have been left unbuilt in the past 10 years. Robert Jenrick, the housing secretary, is considering the levy as the government oversees the biggest shake-up of the planning system for 70 years. About 2.8 million homes have been given the green light for construction since 2010-11, but only 1.6 million have been built, according to analysis by the Local Government Association. Critics have claimed that such “land banking” has artificially kept house prices high and deprived first-time buyers of the chance to get on the property ladder. Housebuilders have rejected this analysis. The Times, May 14